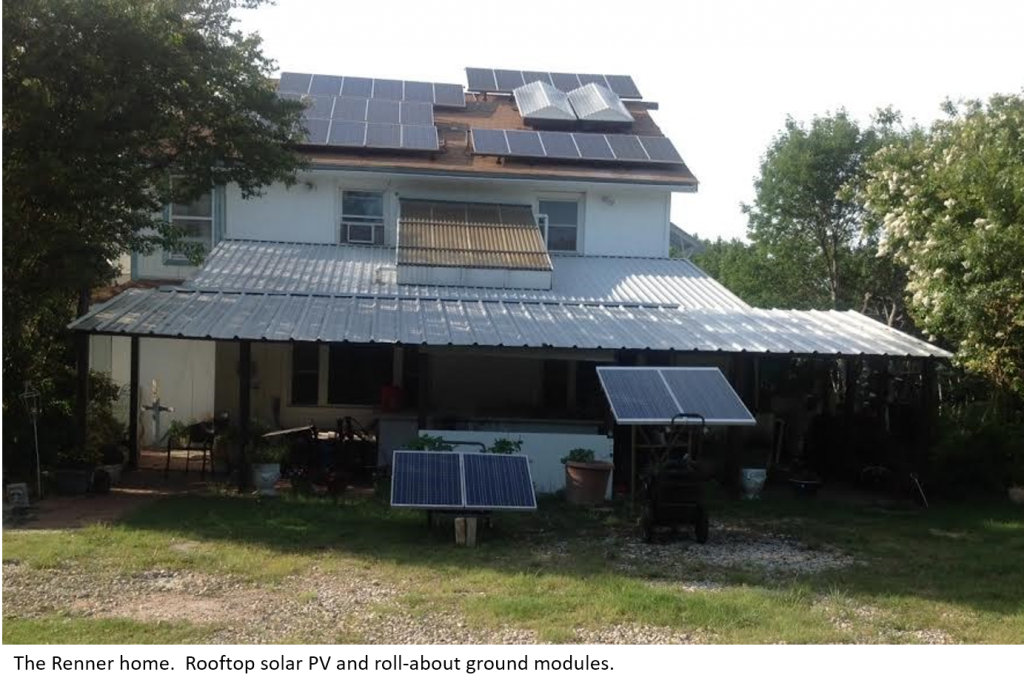 Mike Renner is the former President of the North Texas Renewable Energy Group (NTREG), a chapter of the Texas Solar Energy Society. In an article appearing in the May 2013 Solar Reflector, Mike wrote about his and his wife’s experience transitioning from total dependence on the Texas grid to a life lived generating their own energy for all their needs.

In Our Journey to Go Off the Grid, we grid-dependent readers gain a little insight into what’s involved, both pro and con, bidding a do-it-yourself farewell to your electricity provider.

I recently spoke with Mike to learn how he and his wife Elida are coping, five years later, without a fundamental element of modern society: the power grid.

The Renner home is a 2,256 square foot, two-story structure on a five-acre plot in rural northwest Ft. Worth. In size and shape, it is similar to the average Texas residence and is very energy efficient. However, the local utility offers very little compensation for renewable energy exported to the grid, so the couple makes liberal use of their electric well pump for yard irrigation instead of supplying free electricity to the utility. Their resulting energy consumption ranges from 1,200 to 1,600 kilowatt-hours per month. 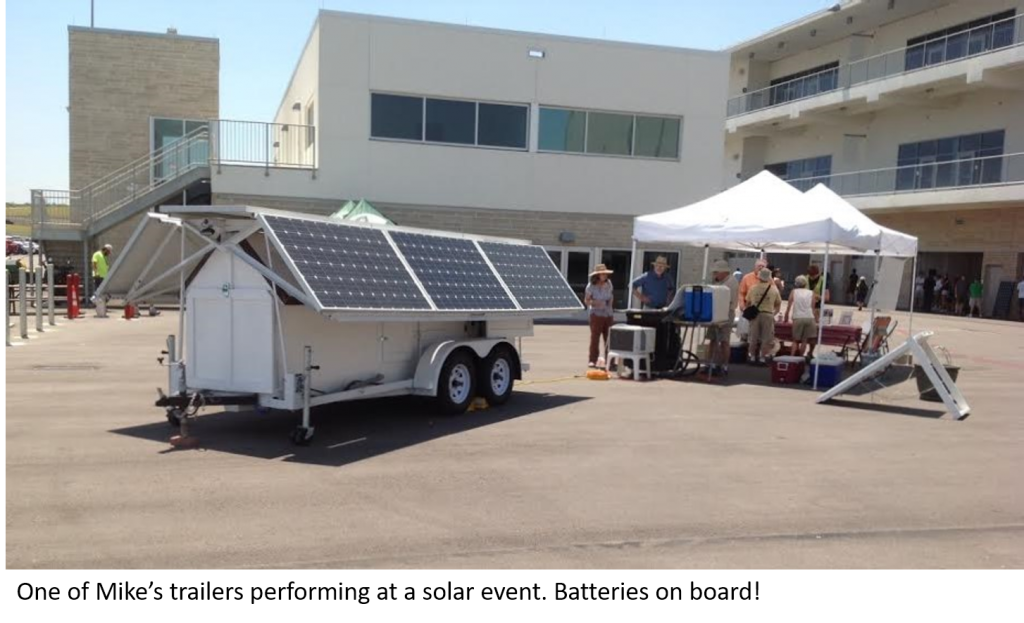 In 2001, Mike turned to solar PV to begin the transition to an off-grid lifestyle. His rooftop PV array started small, but gradually grew to a 3.6 kW system. Since Mike is very active in outdoor events around the state, he decided to construct two mobile solar trailers to provide on-site power at these gatherings. When parked at home, the trailers provide additional energy. By 2012, his total PV capacity reached 8.4 kW.

Over the years, Mike installed a 7.5 kW wind turbine, solar hot water systems for domestic hot water and radiant heat, battery storage in the solar trailers, and a whole-house, web-based energy controller. By 2012, Mike was ready to switch off the main breaker to the grid. That year, Mike’s power systems generated an average of 1,600 kilowatt-hours per month, enough to meet all of his energy needs.

Solar Reflector: The obvious question most people would have is how your off-grid journey has progressed these past five years. You mentioned one catastrophic event that caused your systems to fail, a misfortune any grid-tied home could suffer. What has been your overall experience and satisfaction with living off the grid?

Mike Renner: Yes, we suffered a lightning strike that destroyed most of our electrical control components two years ago. It took an entire month to secure replacement parts, so we actually switched back onto the grid while waiting. Fortunately, the solar trailers survived to power three window air conditioners in the summer heat. We ended up with a $34 electric bill that month. 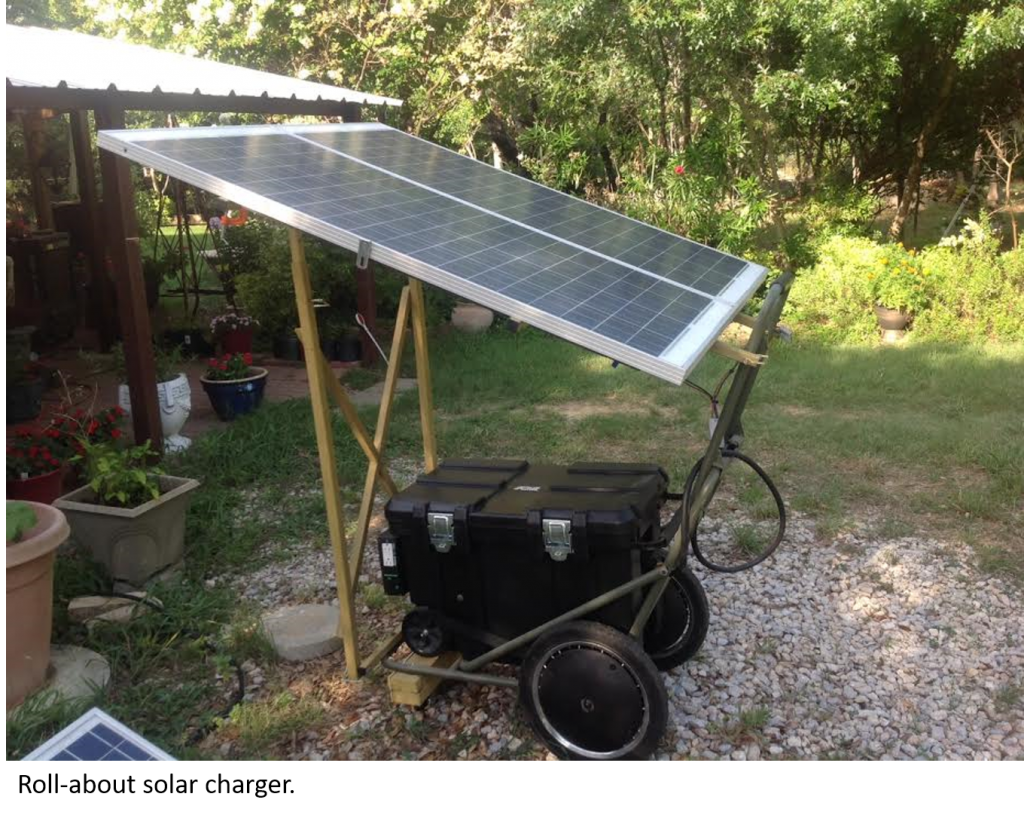 Concerning our satisfaction, first of all, our power is nearly 100 percent green. We create no pollution whatsoever, except for a backup generator used about 20 hours/year to charge the batteries. I don’t have to worry about grid power failures; in fact I won’t even know if the grid fails. In terms of cost, I’m not certain whether I am breaking even. Maybe I’m a little ahead, but my incentive was never about money. I think we need to protect the planet, and this is my way of doing that.

I have been very happy with the system. This is my hobby. Some people spend money on fishing boats or other things that also cost money, but this hobby pays for itself over time. I feel great satisfaction knowing I am in control of my own power in a way that is non-polluting.

Solar Reflector: Have you made any significant changes to your energy systems from what you described in 2012?

Mike Renner: Many changes; each year, because of the 30 percent tax credit, we gradually increase our solar capacity with the units you see out in the yard. We now have a capacity of 10.5 kW. We also have a workshop that is very cold in the winter and unbearably hot in the summer. This spring, I sprayed insulation in the workshop and extended air conditioning to it. I hope to support that extra load this summer with the solar we added over the years. I also gradually upgraded the battery bank so we can function longer and extend battery life (we went from 38.4 to 50.8 kWh). There are always little improvements you can make to enhance the system, which I enjoy doing as a hobby.

Solar Reflector: You are obviously comfortable with do-it-yourself construction. Your background is in electronics and you work as a lead avionics technician. You passed the NEC license exam so you could perform your own electrical installations. What advice would you give to those of us who are not so electronically inclined, on installing a grid-tied or off-grid system that would approach net-zero energy?

Mike Renner: Electricity can kill you; hire a professional to be safe. First, have an energy audit performed on your home and correct any deficiencies. It is cheaper to do efficiency upgrades, like better insulation, than any other course of action. The second step would be to contact a solar installer to right size a solar system for the reduced electricity needs resulting from your efficiency improvements. Third, I would not recommend going completely off-grid. The typical homeowner can achieve net-zero for less money with a grid-tied solar system if the utility provides reasonable compensation for the energy you supply to the grid. 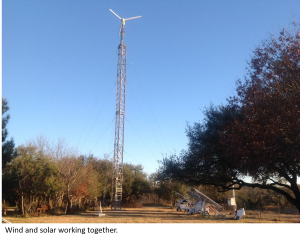 Solar Reflector: We city folk could never install a wind turbine on our property due to city codes. What was your motivation to combine solar and wind? Would it be feasible to continue your off-grid lifestyle with just one or the other?

Mike Renner: It is feasible to do without wind. Solar is more consistent, and wind is more seasonal with mechanical moving parts that require regular maintenance. However, they complement each other. Wind keeps the batteries from running down too low at night, but it is an extremely variable resource. If I had to choose, I would choose solar over wind.

Solar Reflector: Your article talked about some of the lifestyle choices you and Elida made to live off-grid. It’s been said that there are no such things as net-zero buildings, just net-zero people who live in them. For example, you wrote about dialing down the thermostat to 68 degrees during hot summer days when solar energy is plentiful, such that the air conditioner runs less at night. That is counterintuitive to how we think about shaving peak daytime loads on the Texas grid. What are some of the other behaviors you adopt to balance energy supply and demand?

Mike Renner: The two primary loads in the house are winter heating or summer air conditioning, followed by water heating. Since we rely on storage in the evenings, we want to run the biggest power loads during the day, like air conditioning. We installed awnings and solar screens on the east and west windows to reduce summer heat gain. In the winter, we place foam-insulated panels in our bay windows at night to hold in the heat. Rather than use the electric clothes dryer, we hang laundry out to dry. The added benefit is that UV radiation kills any bacteria that survived the detergent wash.

Solar Reflector: Unlike modern solar modules rated to produce 250 to 350 watts of power, the modules you installed 15 years ago produce less than half that. How have your solar modules stood up to our harsh Texas climate?

Mike Renner: The 120-watt modules we purchased 15 years ago cost almost $500 each. The latest modules we purchased are 345 watts and cost about $270. After ten years of use, six of the original modules failed due to a manufacture defect and the manufacturer replaced them under warranty. So far, there have been no problems with any of the other modules.

Solar Reflector: As you know, there is tremendous interest in the emerging solar+storage technology these days, with Elon Musk and others widely promoting Li-ion battery storage. As a very early adopter of energy storage with lead-acid batteries, is Li-ion storage economical at this early stage of market penetration?

Mike Renner: Battery storage is still a bit expensive for use in homes. When my lead-acid batteries eventually wear out, the batteries that will replace them will be cheaper, more efficient, and longer lasting. The economics are not quite there yet, but it is just around the corner.

Solar Reflector: Thank you, Mike. I hope we have an opportunity to chat again — five years from now.

Ron Zagarri serves as vice-chair of the Texas Solar Energy Society and the editor of the TXSES Solar Reflector. He is a retired former sales executive in Information Technology and holds degrees in Computer Science and Geology.