With sunny days and afternoon temperatures pushing into the 80s, it is hard to believe that just over a month ago, Texas was in the grips of a historic freeze that broke both the natural gas and electricity systems and left millions of Texans shivering in the dark. If only there was some way to harness all of the hot air from all of the terrible hot takes out there, we could probably power the entire grid through the summer.

At a high-level, the grid failed to match supply and demand. And just like in any market where there is not enough supply to meet demand, not everyone who wants the product – in this case, electricity – was able to get it. What makes electricity different than other products is that if real supply-demand mismatches are allowed to persist, the entire market collapses and no one is able to get electricity. In fact, the Electricity Reliability Council of Texas (ERCOT), the grid operator that services about 90 percent of Texas customers, said that they were within a few minutes of a catastrophic grid collapse that could have taken days if not weeks to bring back online.

When one thinks of Texas, one doesn’t usually think of snow and ice. More likely, cowboys and the hot Texas sun come to mind. However, at the coldest part of the storm, all 254 counties of Texas were under a winter storm watch at the same time, something that has never been recorded in our state. The cold snap in 2011 that induced a few hours of rolling blackouts wasn’t nearly as cold, widespread, nor did it last as long. To find the most comparable weather event, one has to go as far back as 1989. So, while these events are rare, they are not without complete precedent.

In the end, the projected peak demand for the ERCOT system at 11 am on Tuesday, February 15th was about 76,679 MW, about 19,000 MW more demand than projected for this winter and about 9,400 MW more than the most demand we have ever seen in winter. To put it further in perspective, ERCOT’s all-time peak demand record is 74,820 MW, set in August of 2019. We never hit that new peak, because the grid could not supply that much energy. Instead, we had to turn off the power to millions of Texans for multiple days.

About 60 percent of homes in Texas use electricity for heating, and the other 40 percent use natural gas[1]. Also, roughly half of the power plant fleet in ERCOT runs on natural gas. The record cold meant that Texas homes and power plants were demanding record amounts of natural gas for heating and the electrified homes were demanding record amounts of electricity for their heat.  At the same time, the record cold reduced the amount of natural gas well production by roughly half.

In the end, we were unable to deliver enough natural gas to meet both home heating and power plant needs. Additionally, because multiple wind, coal, nuclear and natural gas plants froze, we were short somewhere close to half of our generation capacity – not a good place to be when you’re expecting record levels of demand. 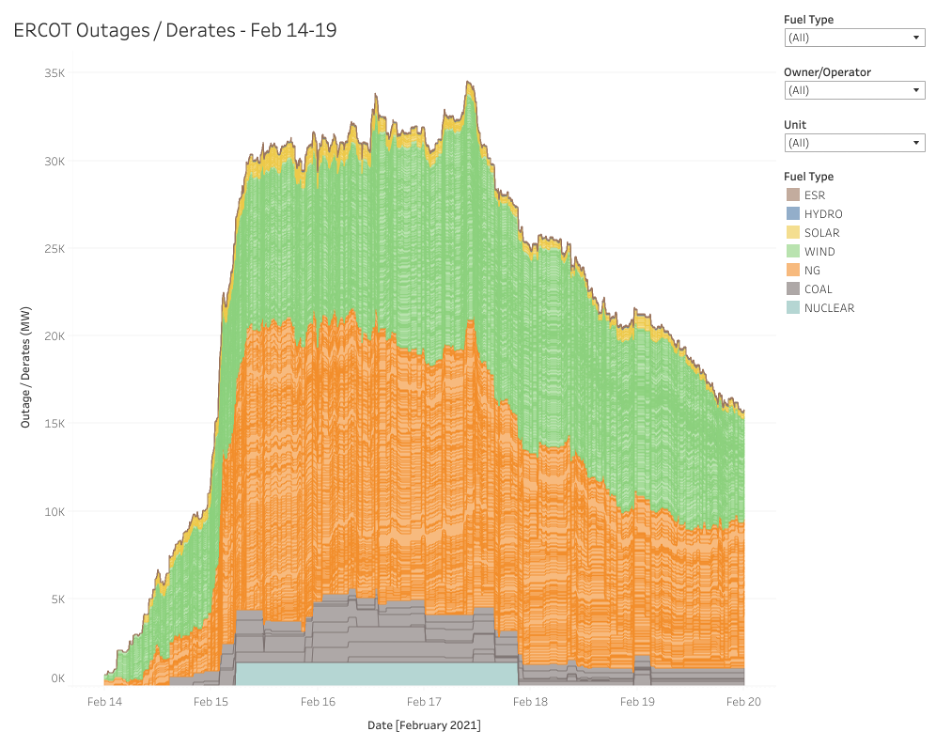 Figure 1: Figure showing all power plant derates and capacity losses for all fuel types during the Texas blackouts. Visualization by Brendon Pierpont: https://twitter.com/brendanpierpont/status/1368066372702326787?s=20

The grid, however, doesn’t rely on all resources equally during winter peaking events. In planning for winter peaks that typically occur early on winter mornings, the grid operator knows that solar and wind are not likely to produce and doesn’t plan for them to be.

If we look at how each resource performed during the blackouts (Figure 2), only nuclear, wind and solar produced at or above their critical minimum levels (red dotted line) for at least part of the time.

Utility-scale solar performed very well, in part because most large solar arrays track; they’re able to rotate away from the snow, then back and forth to allow the snow to fall off. Utility-scale solar is small, relative to other resources in ERCOT, but generally, it overperformed once the sun came out. Distributed solar is slightly different. Although it’s usually fixed and cannot shed snow as easily, that did not mean that they didn’t perform well.

Data from Pecan Street Inc, a smart-grid research and development group based in Austin, recently detailed how real-world solar PV systems performed during the Texas freeze. They found that residential solar array production was down about 60 percent (based on days with similar amounts of sunlight) during the first couple days of the event, but eventually bounced back to normal levels once the snow melted (Figure 3).

The entire week is one that many Texans hope never happens again. One lesson we are learning is that systems are only as good (but sometimes worse) as what you plan for. Not all types of generation fulfill every task that the grid needs, but that doesn’t mean that they’re not useful.

I don’t put my flip-flops away in the winter because they don’t keep my feet warm. Truth is, they are great almost nine months out of the Texas year! We need a strong, resilient and diverse mix that includes a lot of solar to make sure that we are better prepared for whatever the climate throws at us.

[1] There are other sources, but they are much smaller comparatively.

Joshua D. Rhodes, Ph.D. is a Research Fellow at the Webber Energy Group at the University of Texas at Austin and a Founding Partner of IdeaSmiths LLC. His current research is in the area of smart grid and the bulk electricity system, including spatial system-level applications and impacts of energy efficiency, resource planning, distributed generation, and storage. Joshua is also the secretary of the TXSES board of directors.