There’s never been a better time for solar in Texas. I’m proud to be part of an organization that’s making this happen by helping Texans join forces to go solar and fight for their energy rights. Solar United Neighbors of Texas (SUN) does this every day, in a variety of ways.

We help people go solar through our free-to-join solar co-op programs. These groups bring interested members together to bulk purchase solar (joining isn’t a commitment to purchase panels). We work closely with local partners to spread the word about the groups and encourage members to join. We hold free public information sessions and tabling events to ensure co-op members are well informed about solar energy.

Once a solar co-op is large enough, we initiate a competitive bid process on their behalf. Local installers submit bids and a selection committee, composed of co-op members, reviews each bid. The committee chooses the one that best serves the needs of the group; then the installer visits and prepares individualized proposals for each member.

The co-op process usually takes about 6-8 months from launch to final celebration.

SUN has been in Texas for almost three years. In that time, we have run ten co-ops. The last two have been the largest yet. Our Plano co-op has 146 members. The most recent Houston co-op has 291. Nationwide, SUN has reached more than 45,000 consumers and helped more than 6,000 families install more than 50 megawatts (MW) of solar. Here in Texas, we have reached almost 1,500 individuals in the last three years. We’ve helped 142 families install more than 1.3 MW of solar.

While the stats are impressive, the stories behind the numbers are even more exciting. Each co-op has a champion who reaches out to neighbors, helps get the word out and leads by example. One of those champions, Andreas Matzakos, organized community meetings with SUN and offered tours of his own system. Andreas is now one of our volunteer info-session presenters. Another champion, Carol Denson, invited neighbors to her home to share why she was considering going solar. It was a beautiful example of the power of “neighbors” in Solar United Neighbors.

As we’ve grown in the state, we’ve deepened our relationships, enabling us to help even more Texans go solar. This year, in coordination with the anniversary of Houston’s Climate Action Plan, we partnered with the City to launch the Houston Solar Co-op. At a press conference, Mayor Sylvester Turner discussed the benefits that distributed solar generation provides for our health, grid resiliency and climate. Thanks to the power of the City’s social media networks and local press, SUN had to close the co-op early due to record sign-ups!

We’re setting another record with the Houston co-op: the number of solar contracts that include battery storage. Of the first 41 contracts, 27 members have chosen to include battery back-up. People choose to go solar for a variety of reasons: to save money on their utility bills, to reduce their carbon footprint, and more recently, to provide resiliency against extreme weather events like February’s winter storm Uri.

SUN also has an outstanding help desk and process to help those interested in seeking their own solar bids. This process provides the same education that co-op members receive.

Texas presents an interesting challenge and opportunity for solar. Its deregulated market means most electricity customers choose their own retail energy provider. This can be confusing, whether a homeowner has solar or not. Our goal at SUN is to reduce barriers to going solar. We partnered with Texas Power Guide to provide a free analysis to current and prospective solar owners. The analysis looks at past energy usage and the size of the homeowner’s solar array to determine which of the current electricity plans is most beneficial. Our research found that only 3% of Texas solar owners are using the best plan for them. Our tool can help solar owners save hundreds of dollars annually.

While the competitive bid process enables SUN to make solar more accessible for all, more support is needed to reach low- and moderate-income (LMI) residents. The City of Plano, for example, has allocated special funds to help advance solar in LMI communities. As a pilot project, SUN, together with co-op partners and the selected installer, facilitated the installation of a solar array on a Habitat for Humanity home in Plano. It’s a start, with more to come. 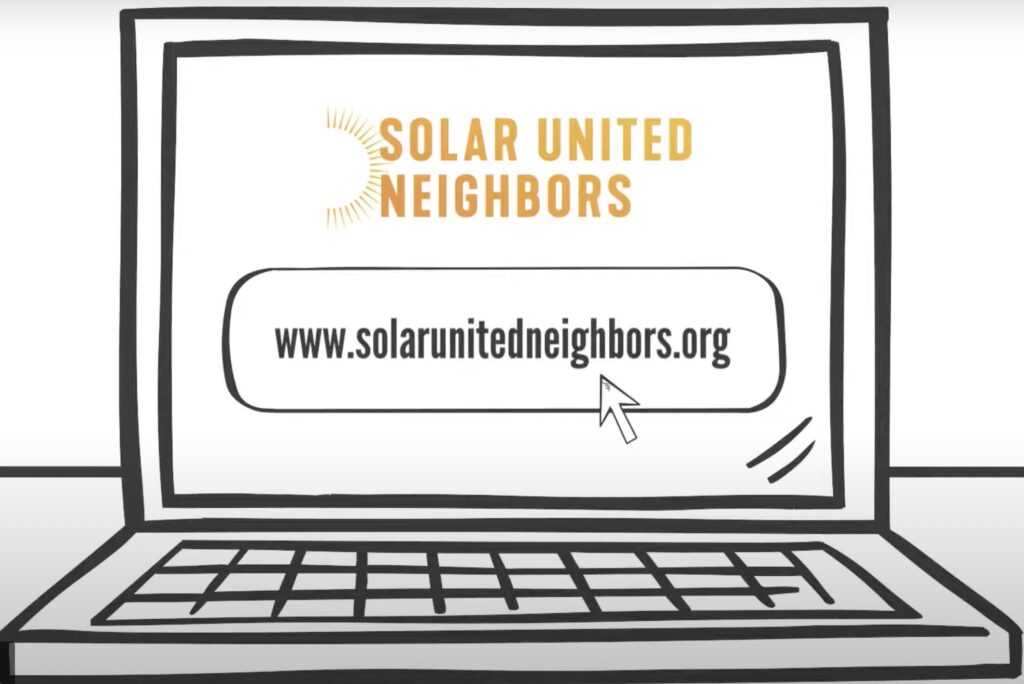 Our work continues long after the co-op celebration. We continue to build community around advocating for solar rights for all. We support legislation that expands solar, like SB 398, the Solar Consumer Protection Act passed last session which ensures solar customers have the information they need to make informed decisions. It will also prohibit municipalities, in addition to homeowner association boards, from unreasonably restricting energy independence. These protections are hugely important for the rooftop solar market and will help to bring more jobs and more solar to Texas.

We oppose efforts to limit solar, such as Pedernales Electric Cooperatives’ recent imposition of unfair fees on solar customers. At the federal level, we are advocating for 30 million solar homes – an economic stimulus to help combat climate change. Imagine 1 in 4 roofs with solar in five years! Working toward a big vision like this makes it a joy to work with an organization like Solar United Neighbors. https://www.solarunitedneighbors.org/texas/