February 22, 2021
Excerpted from pvmagazine
By David Brearley, TXSES Board Member

As my wife and I melted snow this past week to flush the toilets in our 100-year-old East Austin home, located a short walking distance from the Texas State Capitol, it occurred to me more than once that the slope from pride to hubris is slippery and treacherous, much like the steps out our front door and streets all across our frozen and paralyzed state. 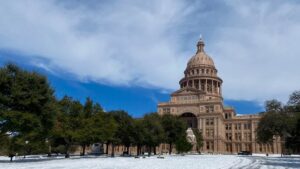 For three days we had no heat or power as overnight lows fell to 5°F (-15°C). A week later, line crews were still restoring power to some homes and businesses.

Based on a cruel combination of metrics, the Arctic air that wobbled down from the North Pole and parked itself over Texas is a clear contender for the worst winter storm in a century.

This was a record-breaking storm that likely inflicted record-insured losses. Many insurance industry experts and associations already project that this winter storm will constitute the largest insurance claim event in Texas history, both in terms of the cumulative number and the total value of claims.

Read the article in its entirety.